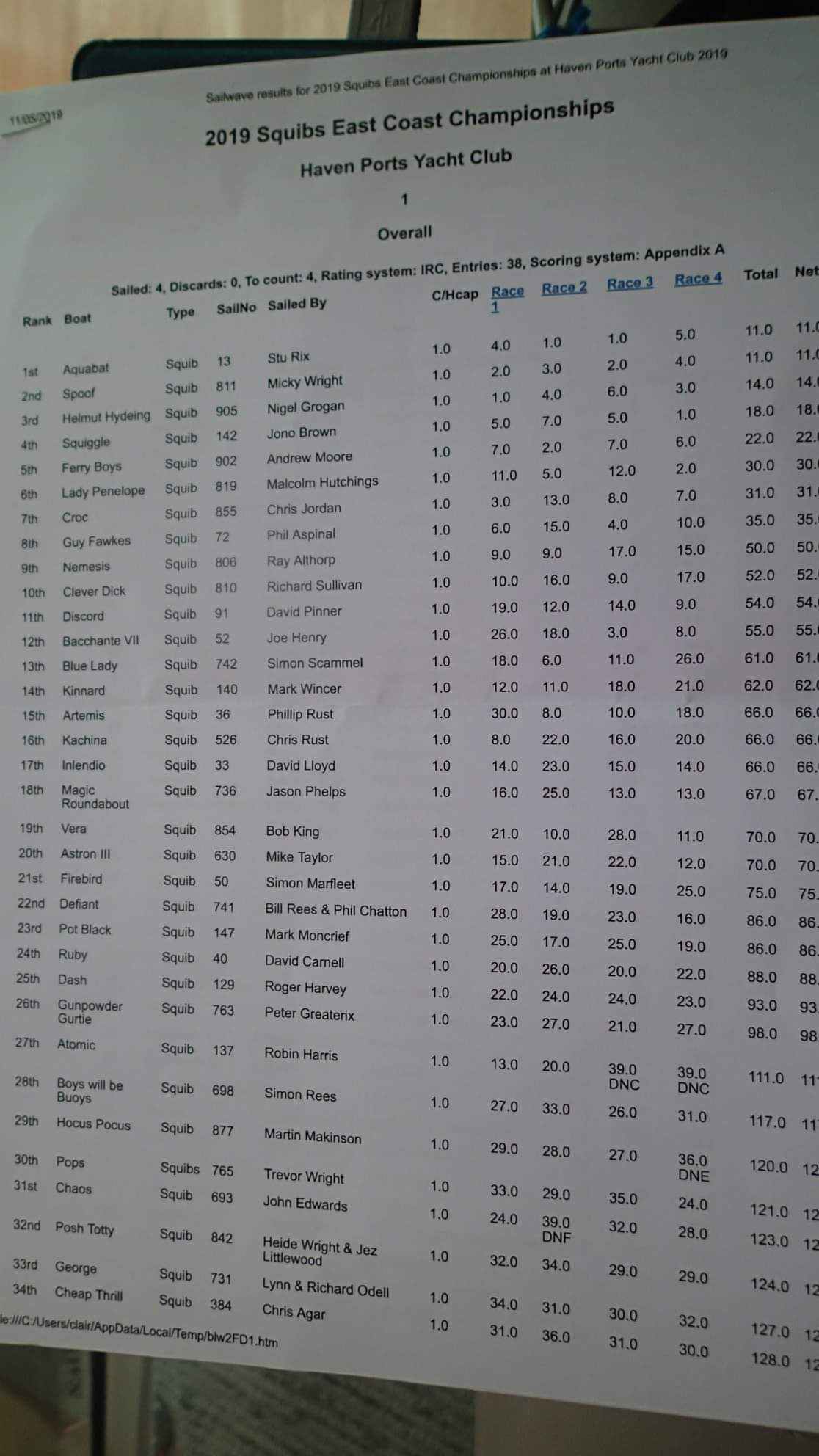 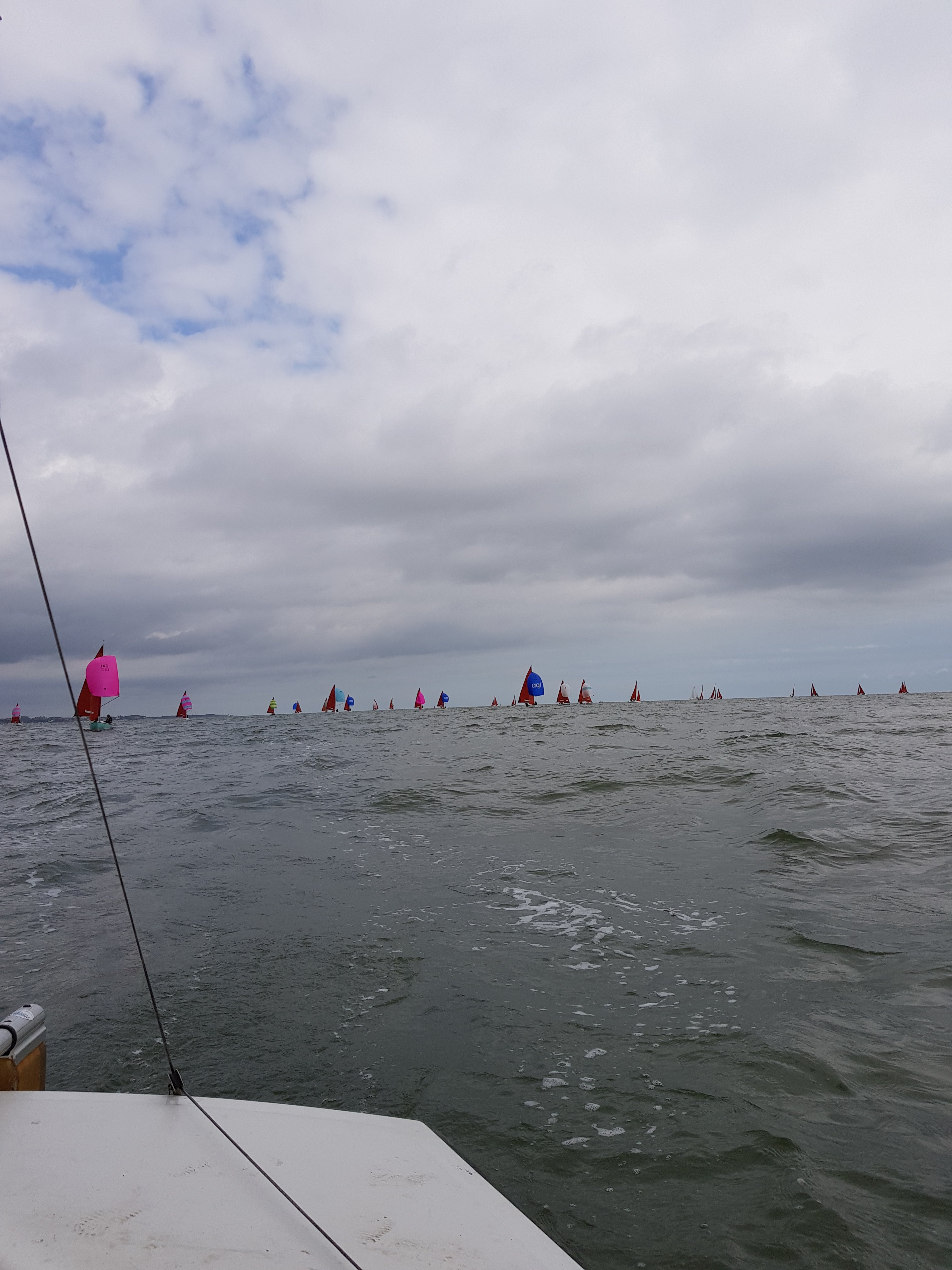 Do you garden? Own an allotment? You find people offer you plants that you think you might want, but really they are just getting rid of a plant they can’t control.
So it came to the squibs; Matt had crewed a few times for a local owner David, at at Haven Ports Yacht Club. He kindly offered team ‘storm cloud’ (Simon and Matt = Suffolk Sails) his recently refitted and polished squib for the East Coast Championship. Simon had no intention of ever getting into a Squib…. We have asked to be licensed sail makers but the class don’t like change… Beware the man bearing gifts?

So Matt said awesome! Thanks David I’ll ask Simon … And so we entered an event with a boat we had never sailed; it was Simon’s second time in a Squib and first time helming!

The entry list was 39, with Cowes week winners, national champs, and open winners. In a boat you don’t know… How bad can it be?

There are many varieties of sailing closed water (lakes), rivers, estuaries and open sea. They are all different and for 99% of the time local knowledge will give you a good advantage, local tide local wind. In Dovercourt bay we felt it would help us into the top half. 7 races two days.

Saturday 4 races, windward leeward course.We do like simple courses, counting the number of hoists is easier than working bearings!Race 1. Tide just turning to flood (the tide is important, always in a boat).

Arriving early the team took their chance to try to get some settings. A brand new prototype pole launching system and also how to work the boat. Fairly happy the team lined up at their (not the fleets) preferred end down at the pin, clean air, no boats. Just the U flag to worry Matt about (think nervous wife in fast moving car).U flag= in the last minute of the countdown if you are in the triangle of the start line and first mark you are disqualified.
One of the first sailing lessons I learnt is transits, without a good line transit how do you know where the line is? So I was confident, Matt was squeaky! We led of the line at the pin ignore any shift less than 10 degrees and miss the tide.The set up was good, the rope and lines provided by the owner were 5 metres to long, we struggled to tack (gosh that sounds familiar). Rounding the windward mark about 20th (?) No losses on the run, the pole system working great. The next leg saw the team work the left harder, the tide was running hard now (flooding to Fetcham, big scam ?) big gains!

Rounding in 12th the team started to get the flow, a teething issue with the pole saw a couple of places dropped. Getting sucked back, rather than going forward. 18th. Expected result.

Race 2. Full tide to Fetcham (it Ebbs to Edinburgh!).

Having got to grips with the set up, the excess string (Stanley, 2:1 jib sheets do not need to be 32m in the Squib!) The team felt confident in the speed and local knowledge.At the gun Matt gave up squeaking about the U flag and boom! Rounding the windward in 5th, a huge twist on the kite saw a drop of one place downwind.

The next upwind saw the team gain, relax a top 5 big gap to 6th. Good hoist and quick, at the leeward mark rounding in 4th a moment of madness saw penalty turns for the team, after seeing one boat head for the finish after leg 4! (Concentrate!)

This allowed the local legends Wink and Pete (Perennial winners of the Easter egg) past, damnit!The last beat saw a few place changes but not for us. 6th. That’ll do donkey.

Race 3. The land that time forgot.

Ok so we felt we could get a proper result now. Boat working, team working, all good.Another minty start, another great upwind; but no prayers to Artemis! The spinnaker decided to do knotting practise.

This is something that happens occasionally, more often when trialling a new launch system!

Losing down wind and holding or gaining upwind, frustrating and will done to keep our heads to finish with an 11th. Not bad considering the failure rate of the hoists.

We lined up and at 20 seconds to go, Simon bishes the traveller, had a little wobble and loses a length. Not good, building breeze though we should be good. We hit the layline hard, with full tide this felt good, the other local legend Mark Wincer was with us (Mark has won lots in squibs and other and is a regular at HPYC). Happy to follow Mark into the windward it was close third or fourth… But the tack was needing to be crisp to avoid 5th and the mark. We missed Mark’s transom by a whisker but nudged the mark! Expletive muttered… Do the turns!

After the turns the spinnaker really didn’t want to play and the places bleed from us, from 5th round we looked like maybe 10 or 11 at the bottom.

Another good upwind saw a gain but the spinnaker had turned into the spawn of Satan, it just refused to fly quickly and easily, twist after twist.
At the penultimate drop, rounding in a steady 10th, as Matt was cleaning the lines away Simon called for a tack as the team sat down, Simon found himself sitting down in the North Sea holding a tiller extension… Not good, not fast. A two person boat generally needs two people in it at all times.

There was a nano second when Simon realised he was not helming anymore and Matt realised the same, the very next nano minute was taken up with “how the #$%€ do I get you back on board?”

Swim forest, swim! I can confirm the North Sea is cold, not bracing, it’s bloody cold!
Back on board, tiller reattached the team needed to claw back as many places as possible. This was not going to be easy when the skippers head has been frozen to 0 degrees!I’m amazed at how bad our (ok, mine) sailing became after a cold water dunk. Lazy, poor decisions, missing shifts. If we could go backwards we did! As if to rub salt into the wound, the pole line split preventing us from gybing and we really needed to gybe the kite so we could fly to the finish.
Dropping the kite we dropped another two places. 26th. Hmmm that hopefully is our discard.
Huge thanks to #havenportsyachtclub and for the tow home.Three races tomorrow, Game on! Currently we are third local boat, 13th overall 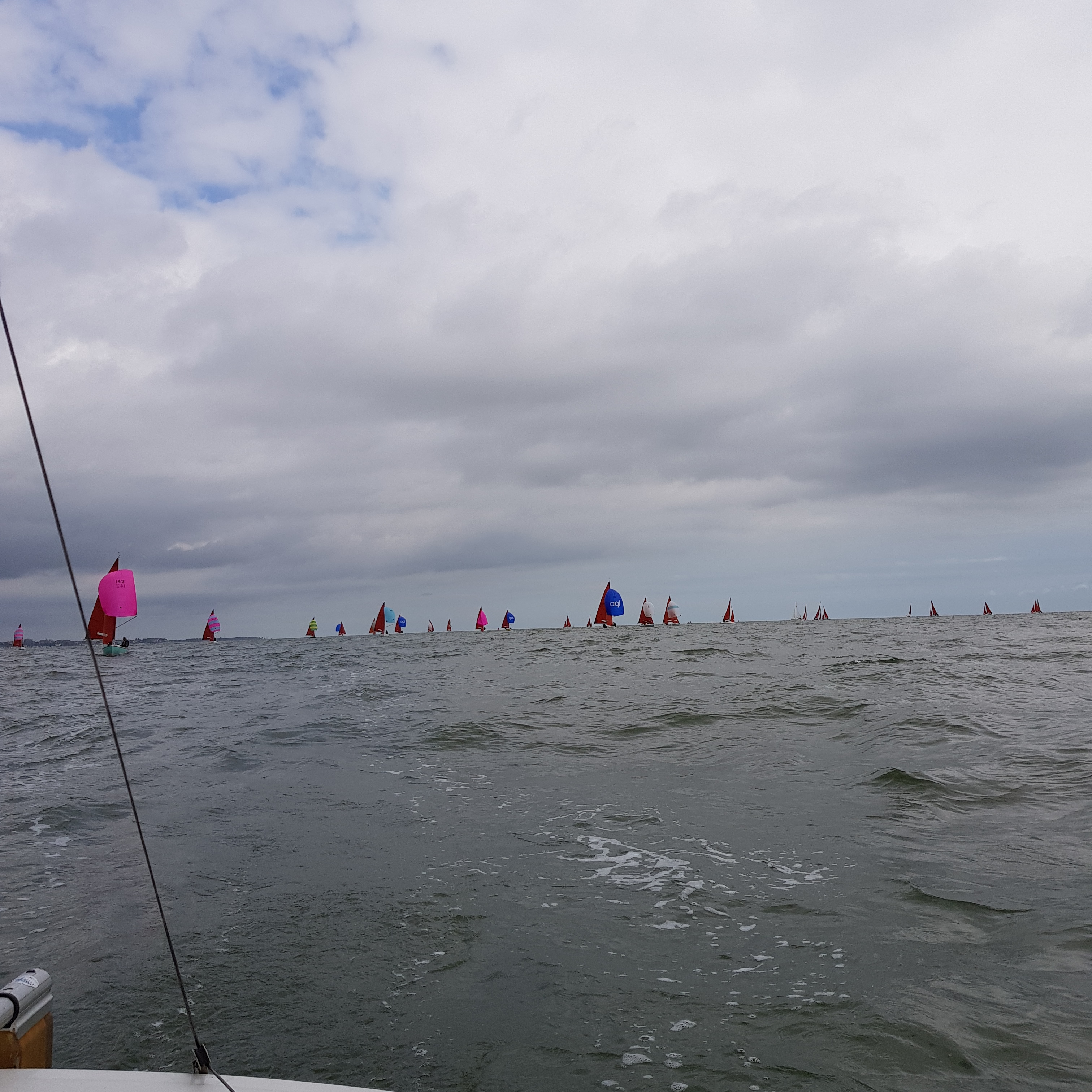 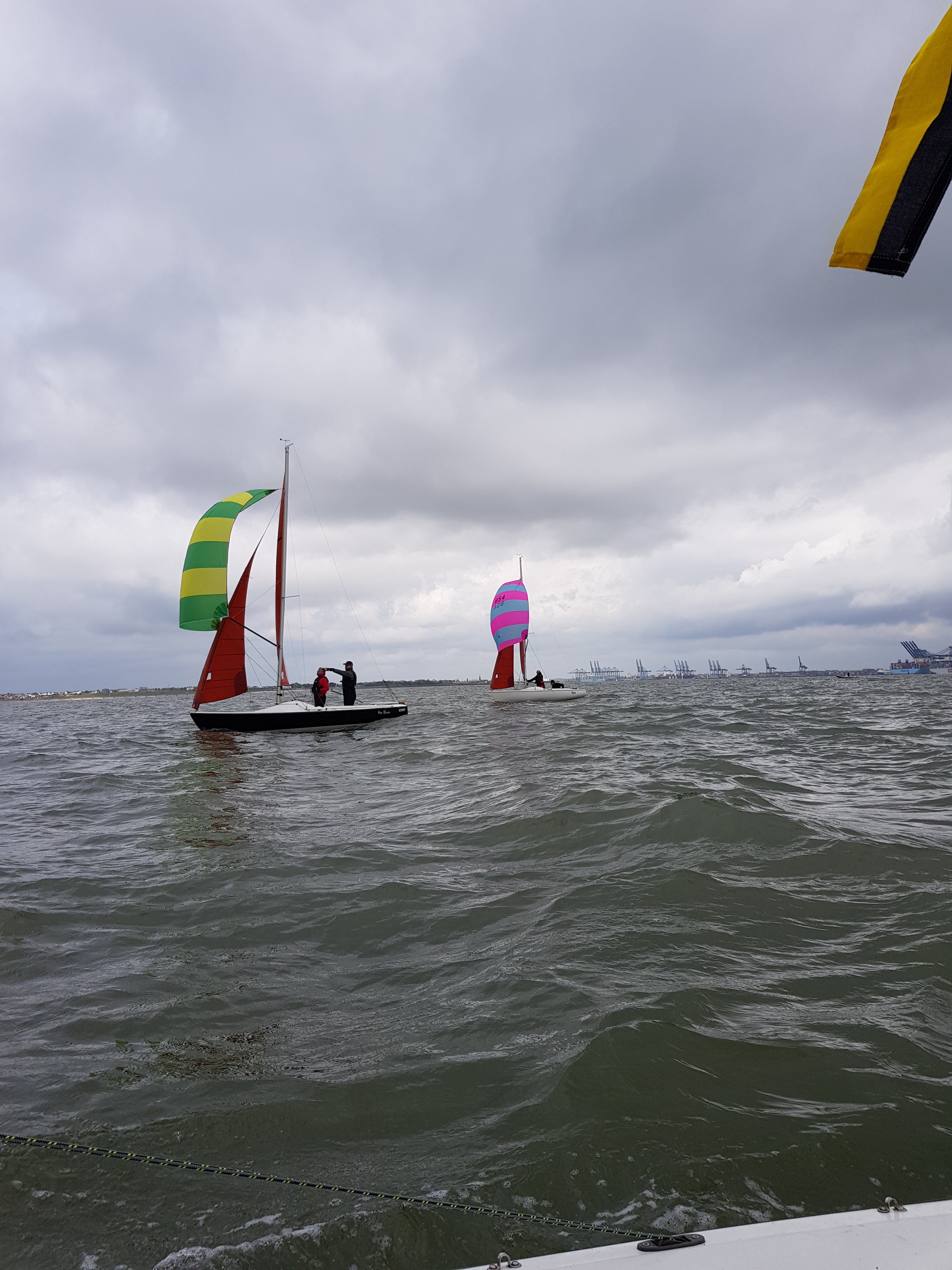 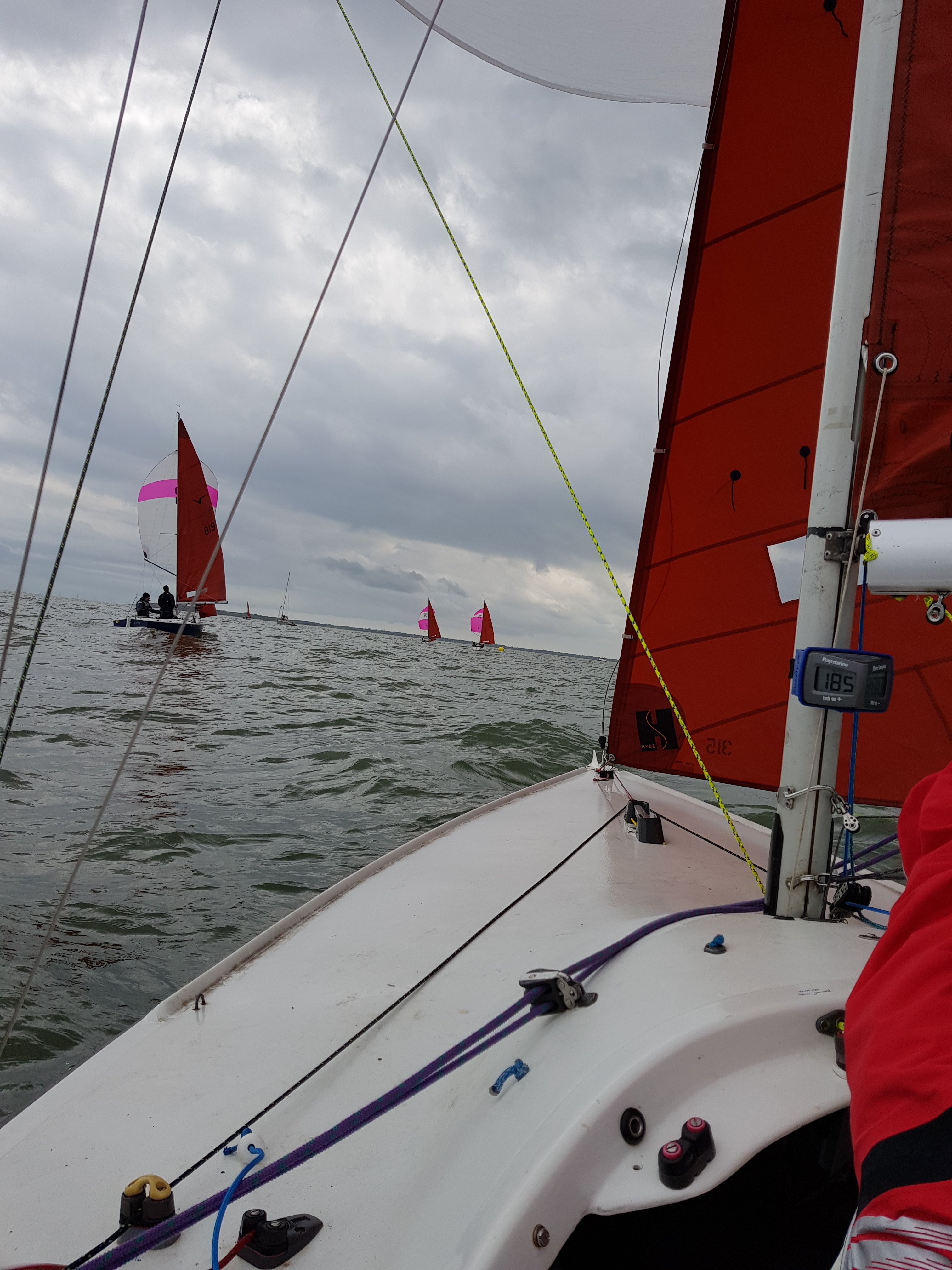 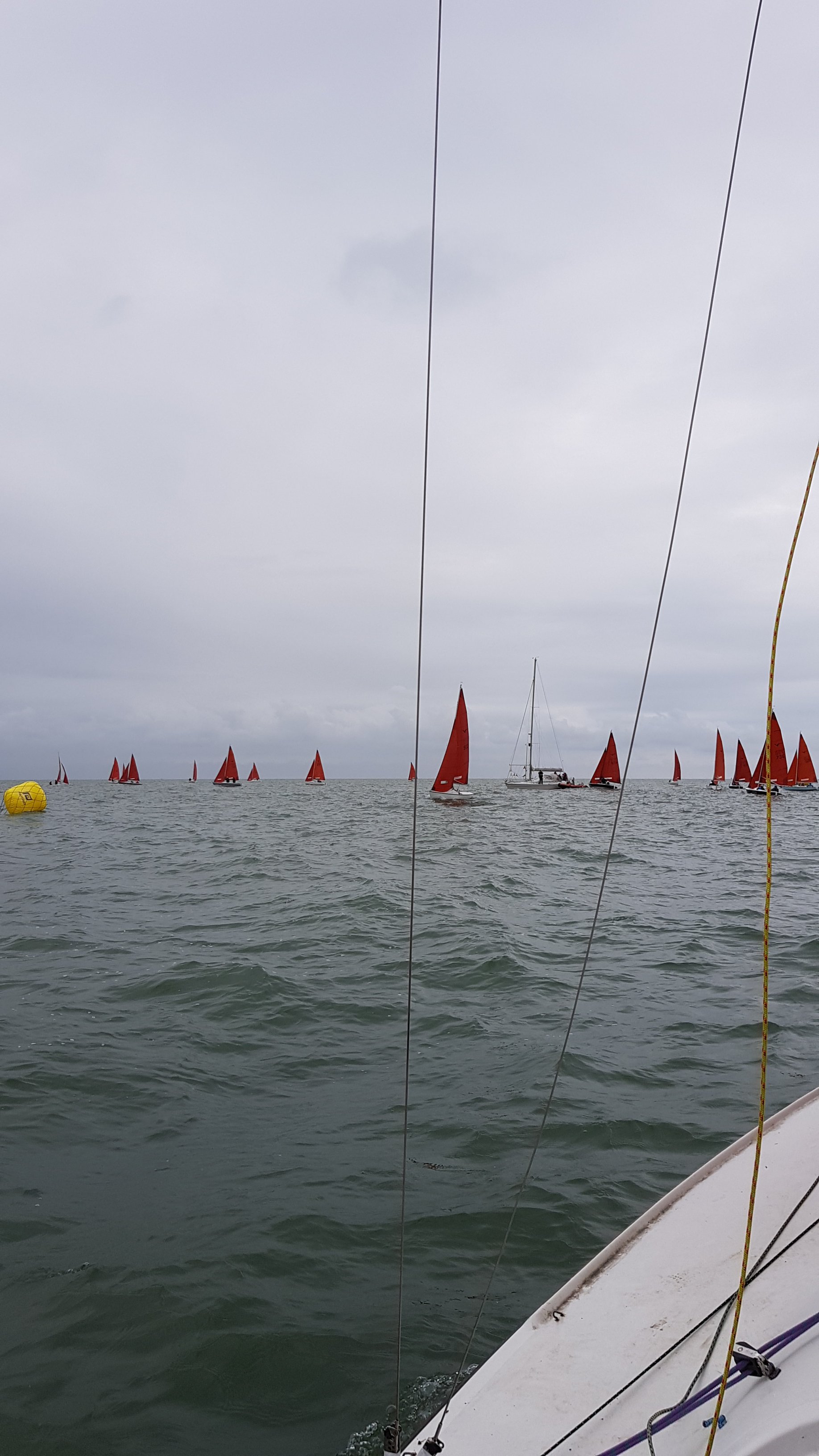 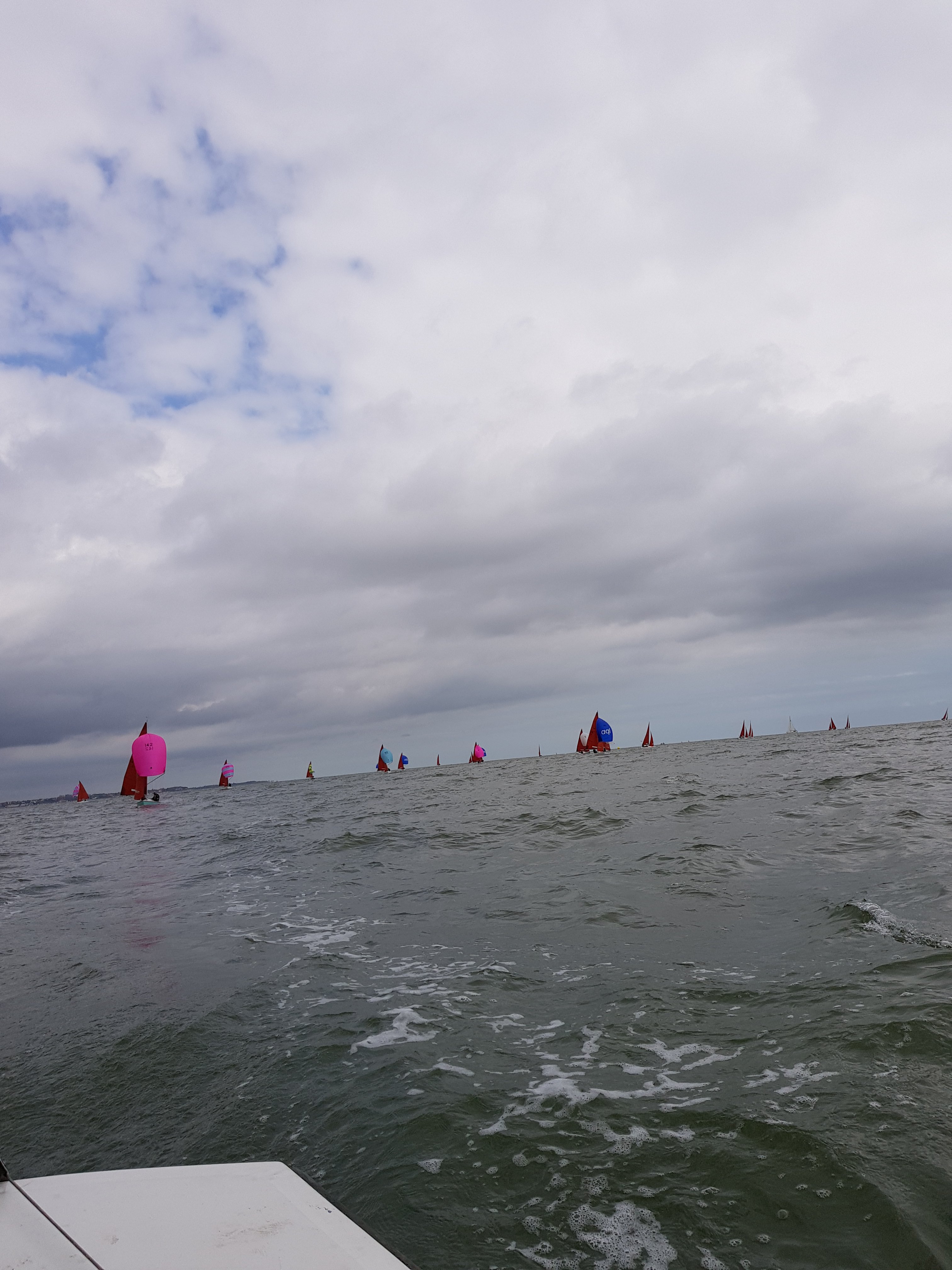